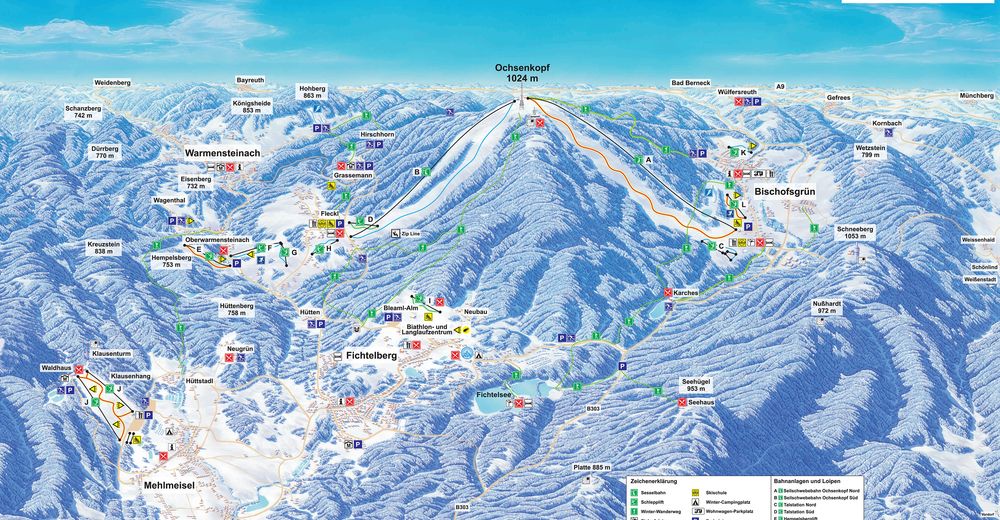 The four communities of Bischofsgrün, Fichtelberg, Mehlmeisel
and Warmensteinach snuggle like a chain around the second
highest mountain in the Fichtelgebirge. This is the location for
winter fun at the heart of an intact natural setting - whether
with snow shoes hiking right over the summit, on cross country
skies along prepared cross country ski trails or down into the
valley on snowboard or skis. There are ten kilometres of slopes,
80 kilometres of prepared cross-country ski trails, two toboggan
runs, a snowboard park, two lifts with twin seats and 10 T-bar
lifts as well as two large ski schools offering ski hire facilities.
Winter holidaymakers can choose from a large selection of
overnight options ranging from holiday flats or chalets to 4 star
hotels.

Family-friendly ski resort - ski instruction for infants
The ski resort boasts approximately ten kilometres of slopes and
is ideally suited for beginners and families alike. Nevertheless,
even experienced skiers will find ski excursions at the weekend
well worthwhile. The Klausenhang has an FIS slalom course. Two
lifts bring skiers to the top of the 1,024 metre high Ochsenkopf
in just nine minutes. The medium difficulty northern
descent is 2.3 kilometres long and the longest alpine descent in
Northern Bavaria. The easy Southern descent is 1.9 kilometres
long. Other slopes are equipped with ten T-bar lifts, and several
of them offer floodlit skiing until 10 p.m. Snow cannons ensure
the northern slope remains white until the end of March.
Sledding is possible on the southern side at the Bleaml Alm and
on the northern side at Lattalift.
The day ski pass for Ochsenkopf costs 22.00 euros for adults
(two euros reduction with health resort ticket), and for children
between six and 15 years of age 18,00 euros. Evening passes
for floodlit skiing with private operators cost around ten
euros for adults and between seven and nine euros for children.

Two famous ski schools
The Skischule Nordbayern Northern Bavarian Ski School is
based at the valley station on the northern slope. Around 140
ski instructors are on hand to teach the joy of skiing. For small
children there is the „Nubi Club“. The „increasing ski length“
method is employed - starting with 65 centimetre long skis.
On the southern side the Hottenroth Ski School offers for
young skiers especially, and those still keen to learn, skiing fun
with „Juhuu“ the elk. Several ski hire stations stock the latest
equipment for skiers of every experience level.