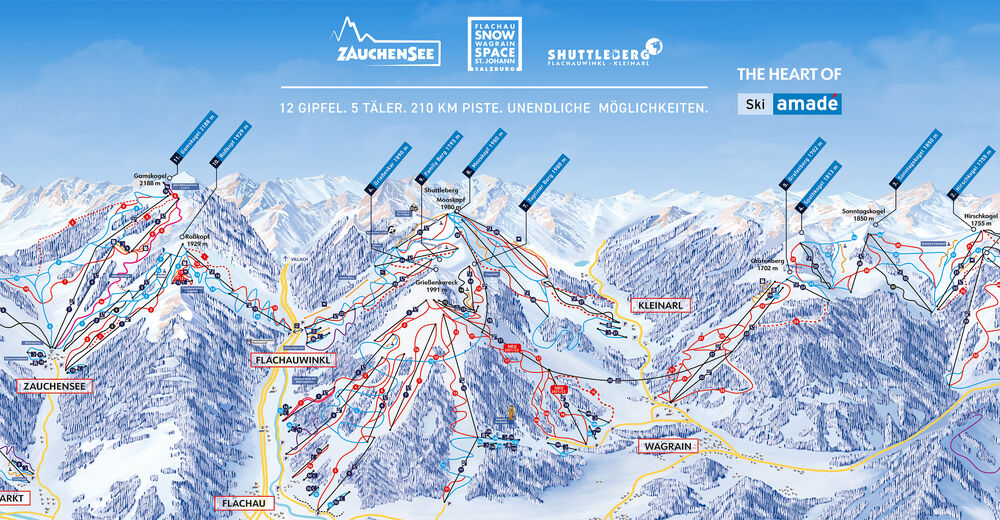 The new panorama link connects the ski area Zauchensee / Flachauwinkl / Kleinarl with the Snow Space Salzburg. This creates one of the largest and most varied winter sports regions in Europe in the heart of Ski amadé with 12 peaks, 5 valleys, 210 kilometers of piste, numerous freestyle parks and even more freeride spots.

Great skiing from Alpendorf to Zauchensee
The 10-person gondola lift ‘Panorama-Link’ runs between Shuttleberg and Snow Space Salzburg and connects Zauchensee / Flachauwinkl / Kleinarl with Flachau, Wagrain, St. Johann and Alpendorf to form one almost consistent ski and snowboard area. Between the two sides of the valley in Flachauwinkl, winter sports enthusiasts can comfortably cover the short distance under the Tauern Autobahn with the ski bus.

Ski, board and freeride enjoyment for the whole family

Zauchensee has been the venue for FIS World Cup races for 40 years. The Gamskogel run is one of the most demanding and fastest courses in the women's skiing World Cup. From the sporty World Cup run to the wide carving run, the ski paradise of Zauchensee offers numerous slopes for every level as well as plenty of freeride fun. Families can look forward to child-friendly practice lifts, Zauchi's Kinderland and the Familypark on Rosskopf.

Thanks to the high altitude, snow is guaranteed until well into spring. The top prepared slopes and numerous adventure offers such as fun slopes, family parks, photo points, love hearts and skimovie race tracks (parallel slalom and giant slalom) leave nothing to be desired. How much action is included, everyone can decide individually.

Excellent skiing pleasure
The fact that the quality of the pistes and service in the ski paradise of Zauchensee are excellent is confirmed by the repeated awards from the international test portal skiresort.de. Zauchensee/Flachauwinkl has been awarded the title 'Extraklasse' several times as the world's leading ski resort for up to 60 km of pistes. Particular emphasis was placed on the snow guarantee, the quality of the cable cars and the flawless preparation of the slopes. The ski paradise Zauchensee also received five out of five stars for the category of access & parking as well as for the wide range of offers for ski beginners.

Freeride Eldorado Zauchensee
Among freeriders, Zauchensee has long been a hotspot for off-piste action. Away from the groomed ski slopes, a true powder paradise opens up. The so-called "East" from Gamskogel has already become a legend among freeriders on skis as well as on snowboards. Powder fans can look forward to ski routes with boundless panoramic views, untouched deep snow slopes, tree runs, moguls and many off-piste experiences. Guided tours are recommended.

Stop for a bite to eat with regional delicacies
Skiing and snowboarding in the fresh winter air make you hungry. In the ski paradise of Zauchensee, rustic huts and cozy mountain inns along the slopes invite you to take a break. The food is cooked fresh daily, preferably using regional products: At the top of the menu are typical Austrian specialties such as Kaiserschmarrn, Hüttengulasch, juicy beef steaks, Pongauer Kasnocken or steaming soups.

From the city to the ski slopes
The ski paradise of Zauchensee can be reached quickly and easily via the A10 Tauern freeway: From the city of Salzburg in just under an hour, from Munich in about two hours. Parking is available directly at the highway exit in Flachauwinkl, from where the modern Highliner I gondola lift and the Highliner II 6-seater chairlift take you right into the middle of the ski area in just a few minutes. Further parking facilities are available in the area of the Zauchensee World Cup Arena (approach via Altenmarkt).